True happiness comes from the joy of deeds well done, the zest of creating things new.

As part of our Random Hacks of Awesomeness series, we thought it would be a great idea to highlight our favorite hacks based on a couple of common trends we’ve seen so far this season!

To kick things off, we’ll be exploring the theme of Happiness in this curation of hackathon projects aiming to make the world a happier place! 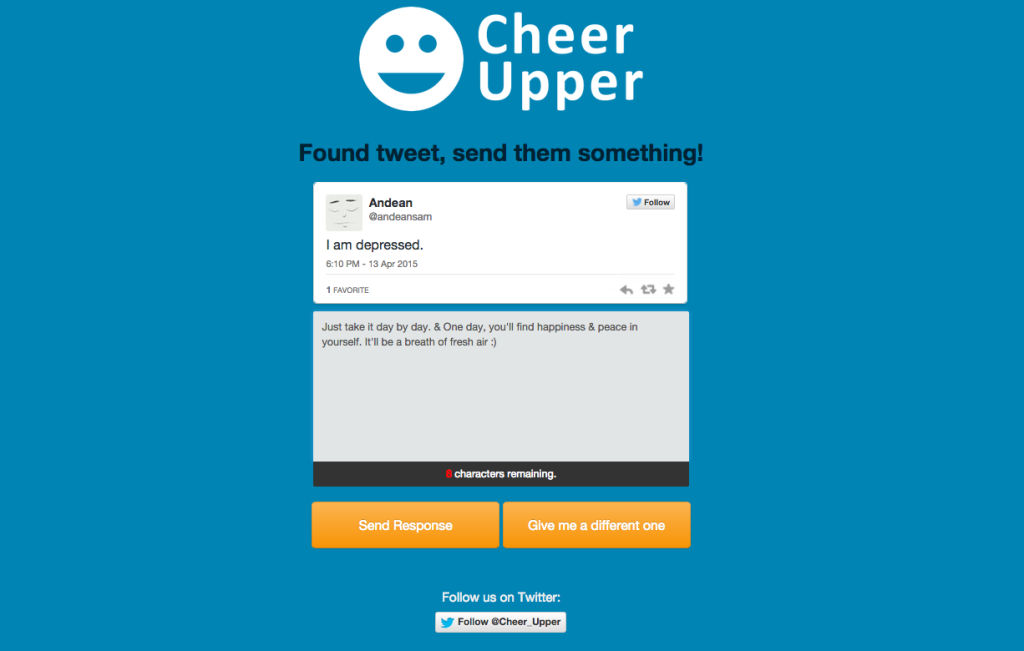 Users (i.e. providers of happiness) on the site can then send words of kindness to a random “sad” tweet, which is reviewed and then posted in real time via the @Cheer_Upper twitter handle to brighten someone’s day! Have some extra happiness to share? Show it using Cheer Upper! The team set up triggers for each attribute that would collect how changes affect the mood of the user. This then gave LiveWell the ability to proactively send pop-up notifications with encouraging messages before the user is predicted to be in a bad mood!

Choose a global region, select an emotion (either happy, sad, or angry), and this Misery Map visualises, in realtime how much populations are affected by your emotion of choice. These hackers from University of Stirling, Scotland combined Bloomberg‘s social-economic data with realtime analytics of social media posts, geo-mapped against specific regions to overlay current emotional states over a global map. The team also built in the functionality to predict the trend of how likely a population would remain or move away from the selected emotion. “This product could be used by media organisations or advertising agencies to target programmes/articles/advertisements of a certain sentiment to reflect or counter how the public is feeling.”

With those suffering from clinical depression in mind, Nancy Minyanou & John Doner went on a mission to build a web app to ensure that motivation & support are only several clicks away! Register on the What’s Up? site and you’ll have a mini dashboard to track your daily moods, input the information of close contacts to alert (via Twilio integration) in the event of a potential crisis with your location, and also the details of locally available community support. “Every 12.8 minutes, someone in America commits suicide. In addition, over 40% of Americans and many more living around the world have reported signs and symptoms of clinical depression. Mental health is an unfortunately overlooked, underrepresented, and underfunded part of society. We want to change it.”

Having seen these awesome hackathon projects, do you think happiness is a hackable entity? Let us know in the comments section below!